Saturday morning 4 am, I open my eyes and drag myself out of bed. It’s the middle of winter but the temperature is sitting around 15 degrees .  With this warmer than average winter weather I decided my target species for the day would be Mangrove Jack (Lutjanus argentimaculatus).  Now, a lot of fisherman tend to stop targeting Mangrove Jack in the cooler months and although these fish do slow down their eating habits during this time, a couple of warmer days can reap rewards for the savvy angler.

At the launch site I was greeted by a spectacular red dawn with the clouds setting the glassy surface of the water on fire with dazzling reflections.  In my family, Mangrove Jack have always been somewhat understatedly, referred to as Red Bream and with that red sunrise at my back I paddled upstream prepared for an encounter with this iconic fish.  Preparation is essential when targeting these fish as they will test your terminal tackle like no other with a savage strike and dirty fighting tactics, they have won many battles with anglers including yours truly by diving back into the heavy cover in which they reside, breaking you off in the process.

My Shimano Aernos 2500 was spooled with 6lb braid and 14lb leader which is most definitely  on the lighter side of Mangrove Jack fishing.  I was about 2 hours into the session with only a couple of follows by some tentative fish.  My lure of choice was a Rapala Skitter Pop and I had been using a slow retrieve most of the morning.  I decided to change it up to see if I could entice a strike using a much quicker retrieve making lots of surface disturbance.  Almost immediately my lure was smashed only ten feet away from the Yak.  The ensuing fight consisted of several screaming runs where the fish attempted to take my lure back home to place on its trophy wall but this time it was not to be.   A 42cm Mangrove Jack was netted with minimum fuss and I then paddled to shore for some photos of my first Yak Jack. 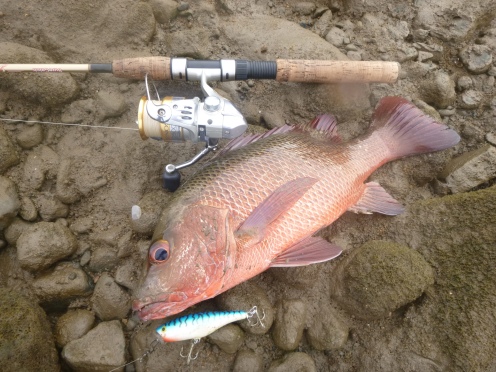 “Red is now my favourite colour”