Arriving at the boat ramp shortly before dawn with a fairly stiff south westerly that could only be described as bitterly cold I went through the routine of setting up for a morning fish. A rag tag bunch of older gentleman were sitting next to the ramp as always, watching the boats come and go, needing no invitation to impart some words of wisdom onto Mackays’ boating fraternity. The comments directed at me on this day were the always predictable, “do you ever catch anything in that thing” punctuated by the token crocodile and shark comment, then came the one that I was actually thinking to myself as I paddled off into the rising sun, “you’ll  be lucky to get much with this westerly”

I was feeling anything but confident but I had a plan for this supposedly no fish producing wind. The previous night I had cut up a smorgasbord of bait to use on this session, so armed with prawns, sand worms, pilchards and squid along with a few soft plastics I set off with no real target species in mind.  I baited up my Shimano Caenan reel spooled with 30lb braid and 20lb leader matched with a silstar power tip pro rod. My bait of choice was a whole pilchard presented on 3 gang hooks floated out the back of the yak while I made my way to my first spot.

Within 50 metres of the boat ramp line began zinging off the Caenan at a great rate as I battled to get the rod out of the holder. I turned the yak to face the fish that was travelling rapidly in the other direction and cranked up the drag. After a few minutes of a most torrid tussle the fish started swimming in large circles directly below the yak giving away its identity. With the first colour showing I instantly recognised the golden hue of a good sized golden trevally, now these fish do grow quite a bit larger than this 85cm speciman but it is quite a large one for this estuary system. 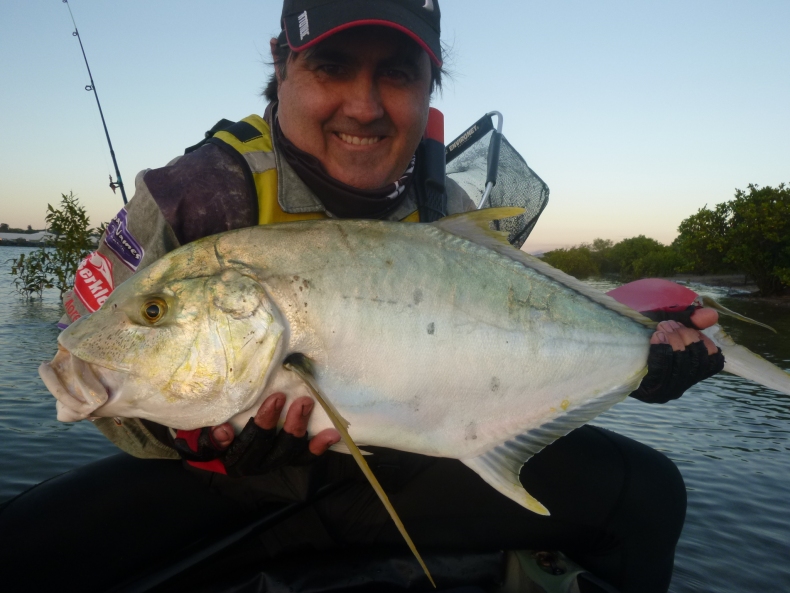 The next hour produced only a small cod and a flathead so although the fishing was definitely a bit tough as my early morning advisor predicted I still managed to land a personal best and to me thats gold!

“Fish when you can“