Posted on November 9, 2014 By mackayakka

Well, this post was going to be titled Saratoga Saturday but unfortunately the primitive beast has eluded me yet again. It was frustrating but far from disappointing with a couple of ‘Toga spotted under snags and although they could not be enticed by my offerings it was amazing to see these fish in their natural habitat, just below the surface with the morning sunlight reflecting off their flanks. Other wildlife in the area included a small brown and white wild pig, numerous water lizards and schools of Bony Bream. With the usual waterbirds and local cattle leisurely grazing on the riverbank it made for an enjoyable days paddle. 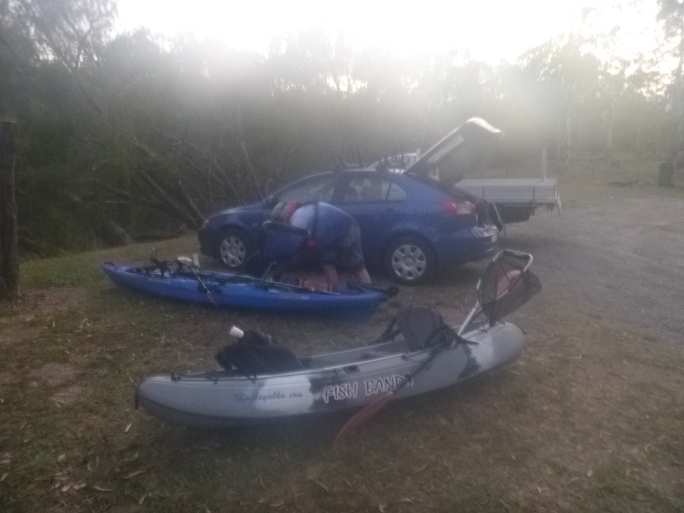 Foggy start over the hill

The fishing was not all bad either with the first part of the session looking very promising, every cast seemed to attract a bump or a swirl behind my Halco Night walker. Unfortunately as the sun rose higher in the sky the fish retreated back into the heavy timber and the interest seemed to wane. With no fish boated in the first hour I changed tactics and tied on a Z-man Soft plastic Pop Frog in white and paddled deep into the snags, using short casts and a slow roll retrieve paid dividends instantly. This fish struck with tremendous force and in hindsight I probably should have tightened the drag a bit more as I did not get to set the hook effectively and the fish spat the lure from its mouth. I do not know what species it was and it doesn’t really matter but fishing is all about learning and that mistake will not be made again. 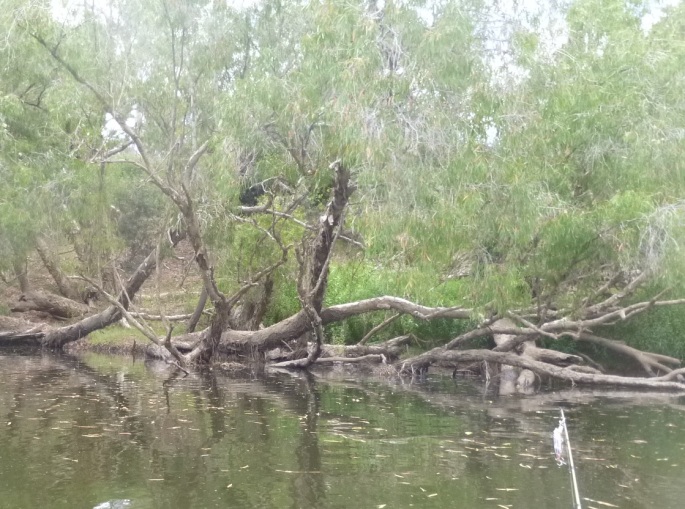 Sooty Grunter (Hephaestus fuliginosus) love to reside under fallen timber such as this and are aggressive fighters that punch well above their weight, they are a perfect species to target in a Kayak and are prolific in the Dawson-Fitzroy river systems but their range stretches further north through to the Northern Territory. “Sooties” respond well to a wide variety of lures and flies and where there is one there is usually a few more. I tend to think of these fish as a toned down freshwater version of the Mangrove Jack and similar techniques and lures will deceive these hardy little sportsfish.

After losing a lure to the many overhanging branches I decided to target the bridge pylons and my first cast was met with a bump of the Pop Frog so I put my second cast in exactly the same spot and fish on! Not a large specimen but a very welcome one and after a quick pic’ a 25cm “Sootie” was released to fight another day.

The wind started to pick up at this stage which pushed me downstream a little quicker than I would have liked but as I drifted past a large fallen tree I threw a Reidys 50mm Bonito next to it and a few twitches resulted in a screaming strike which took me by surprise. It was a great fight with the fish firstly having to be extracted from his lair then once in open water he dived under the yak a couple of times before this 32cm prizefighter finally succumbed.

The ‘Toga didn’t play the game on Saturday but the location, the wildlife and the Sooty Grunter made it all worthwhile!