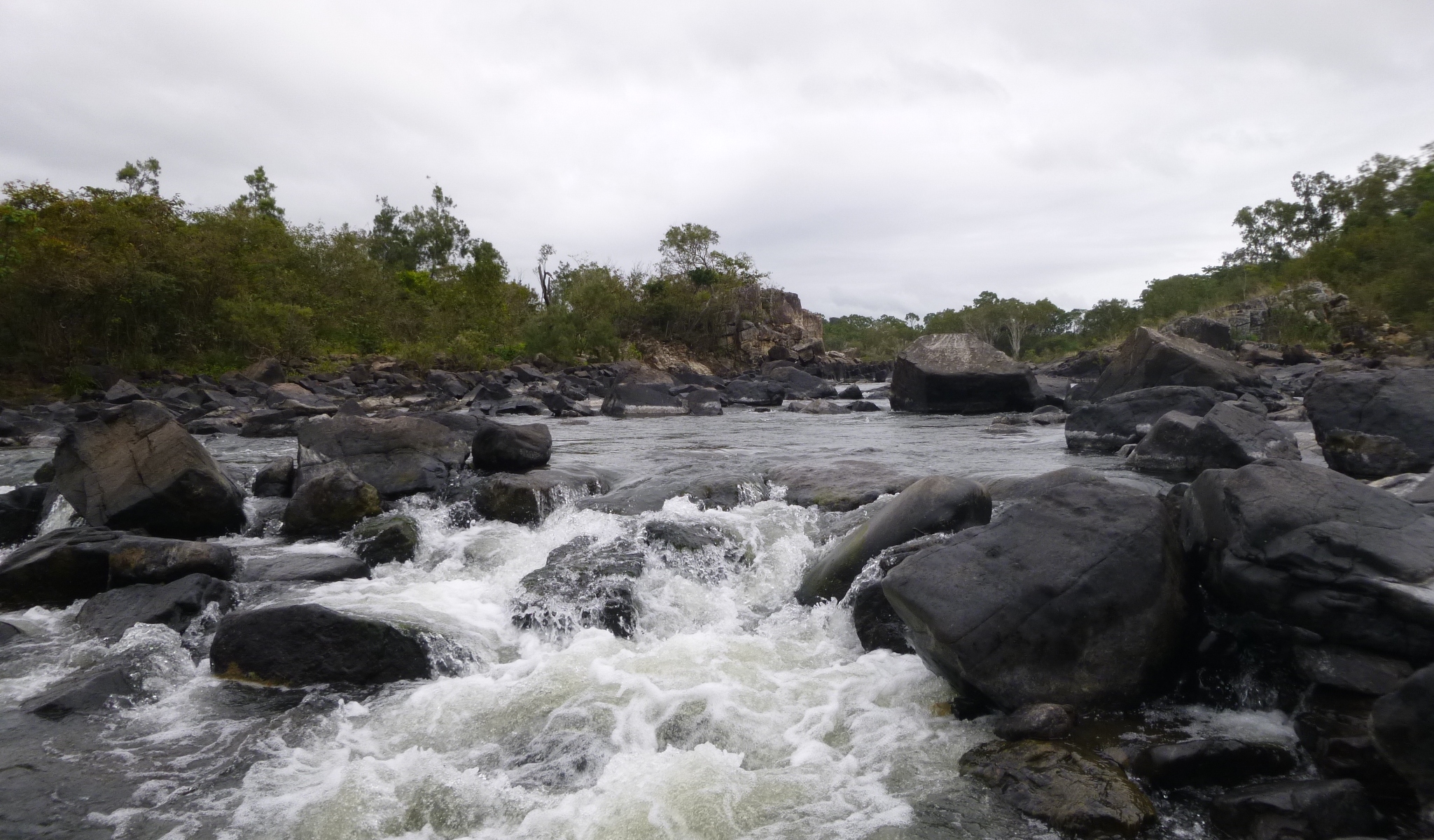 The upper reaches of the Pioneer River below the Dumbleton Weir is a fantastic fishing location with a huge variety of species to entertain even the fussiest angler.  Barramundi, Mangrove Jack,  Salmon, Flathead, Estuary Cod, Giant Trevally, Queenfish and Whiting are all found in this area in abundance, add to this excellent crabbing and spectacular scenery Dumbleton can only be described as a jewel of Mackay’s Fishing destinations.

Kayaking the Dumbleton  waterway is not without risk with strong tidal run, rapids, submerged rocks/timber, a large Bull Shark population and the occasional crocodile sighting. Dumbleton should only be tackled by experienced “Yakkers” or with someone who knows and understands the area well.  That being said in my opinion the angling rewards far outweigh the dangers with Dumbleton accounting for many “PB’s” or personal best captures for both myself and other fellow Kayak Anglers. 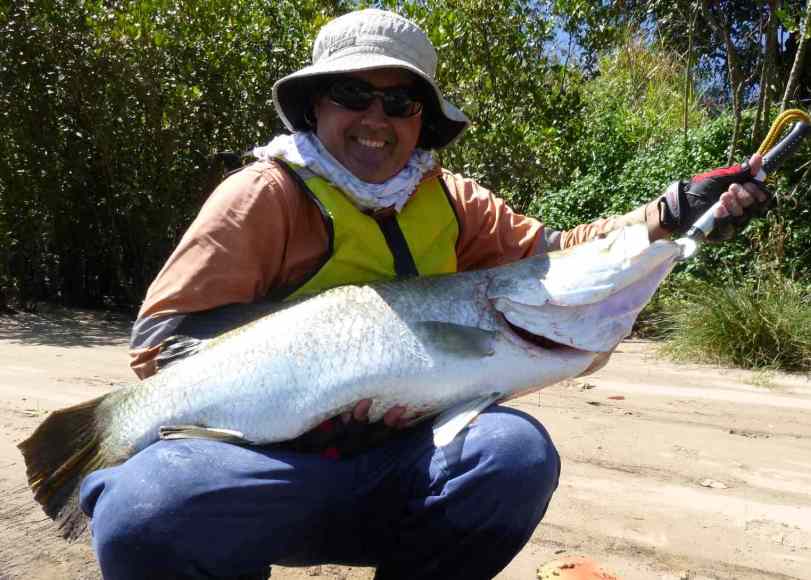 With a small window of good weather this weekend on Saturday morning,  I took the opportunity to head up to Dumbleton with my good mate Pedro aka. Qwikdraw for a Yak session.

My day could not have started any worse, with preparations made the night before I was confident that when I departed at 5am I had everything I required for a great day out on the water. I arrived at the launch site and fitted out the yak at the waters edge, everything was in its place….ready to rock! Now just grab my paddle and away I go….my paddle …OH NOOOO THE PADDLE!!!  Luckily another positive for the Dumbleton area is that it is only 10 minutes away from my house which is where my paddle was happily leaning against a post, oblivious to my distress. (It can happen to the best of us).         So after a quick, frantic drive I was soon launching from the muddy shoreline with the all important paddle in hand.

There was not much action to speak of during the first hour, a couple of large fish breaking the surface and a few large mullet jumping. So I decided to bait up one of my three rods with some squid to see what I could conjure up, meanwhile I threw my Rapala skitter pop around trying to entice a strike from any quality fish lurking beneath the glassy surface. My little Shimano with the squid bait screamed as a good fish took a solid first run, I called it early as a Catfish and my prediction was correct with a 30cm (approx) Catfish getting a snapshot then its freedom.

Pedro and I then moved further upstream throwing lures at any likely looking snags and peppering the rock bars. I had a big hit from what I thought was a Mangrove Jack but did not hook up and I couldn’t persuade it to replicate its original interest in my popper. Then I detected some commotion coming from Pedros direction and could tell instantly he was on to a good fish. Fighting out in open water he made it look easy and boated a very solid looking Mangrove Jack of 44cm. To see my good fishing mate land his first Mangrove Jack from a kayak was priceless and we were both ecstatic.  A quality fish and a new PB for Qwikdraw. 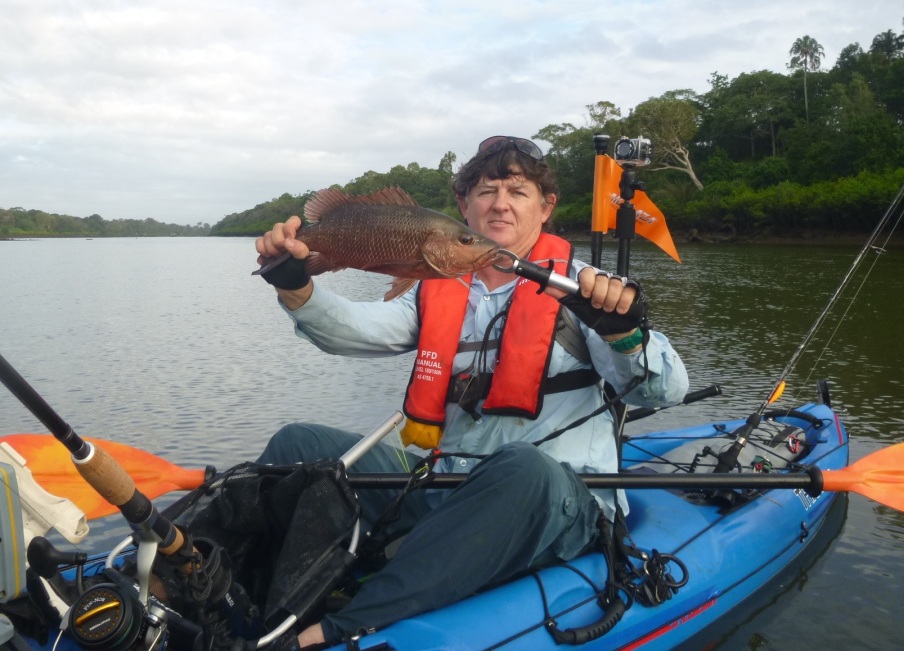 With our morale well and truly boosted I was feeling positive that today was going to be a good one and that maybe,  just maybe,  a new PB was just around the corner for myself. I had been working the rock bars with poppers and shallow diving lures with a few touches but nothing solid,  so with the frustration getting the better of me I decided to try the deeper holes on the other bank with a Rapala X-Rap. This immediately paid off  when I landed my lure adjacent to a partly submerged log and twitched it twice,  it exploded in a violent strike and started peeling line so fast that I had to take a quick glance at the spool to see how much line I had left. Two to Three minutes into the fight and I was thinking “if this is a Jack, its a big one!” but then I saw the flash of silver and realised this was not a Mangrove Jack.  Barra? Queenfish? No, as the fish finally succumbed and the net slid under its 58cm frame,  a Trevally was sitting in the Kayak. To be honest at first I was a little disappointed, it may not have been the PB I was looking for but a PB none the less! My biggest Trevally from the Yak so far.

It was a great morning and Dumbleton delivered two PB’s yet again for two fishing mates. I have many friends but only a select few can I call fishing mates. Fishing mates are different to normal mates, a silent knowing of each others thoughts, no need for banter or overzealous conversation, healthy competition and a seriousness that connects you by sharing the common goal…… the pursuit of your Personal Best.